You are here: Home » News Room » PRODUCTS NEWS » Comparison of the feeding mode of the tablet press

Comparison of the feeding mode of the tablet press

Comparison of the feeding mode of the tablet press

The main structure of the shoe material system, the feeding machine for the shoe shape, driven by the CAM, CAM on the die surface swing from side to side, to complete the feeding, scraping, pushing and other operations.

The working process of shoe material system is given. Lift the upper punch, reduce the diameter of the die punch to the appropriate depth, the weight of the particles is exactly equal to the weight of the tablet, swing the feeder on the die, then fill the die hole, and fill the die with particles; The feeder is separated from the die hole so that the particles in the die hole are flush with the upper edge of the die hole. Press sheet, lower upper punch to press particles into thin sheet; The top punch is raised and the bottom punch is raised so that it is flush with the edge of the die hole. At this point, the feeder again moves into the mold hole and pushes the pill down into the container. At the same time, the punch drops and the mold hole is filled with particles again, and the process is repeated.

In the crescent gate feeding system of an ordinary low-speed rotary machine, the feeder is fixed on the turntable gauge so that the lower part of the gate is kept at a certain distance with a formwork surface. When the mold's rotating ring passes under the feeder, the product particles on the grille fall into the mold hole, and multiple twisted grille plates cause the product to be filled multiple times. The subsequent feeder is equipped with a scraper, which is firmly attached to the working surface of the rotary table. Rotatable disc and die ring, scraping die ring surface of excess particles. Then it falls down again, so that after scraping the material, it hits the powder in the mold hole.

Promote film. The upper punch and the lower punch oscillate up and down along a guide rail respectively. When the punch reaches the top of the outlet guide, push the tablet out of the die hole, through the scraper into the container, and so on. 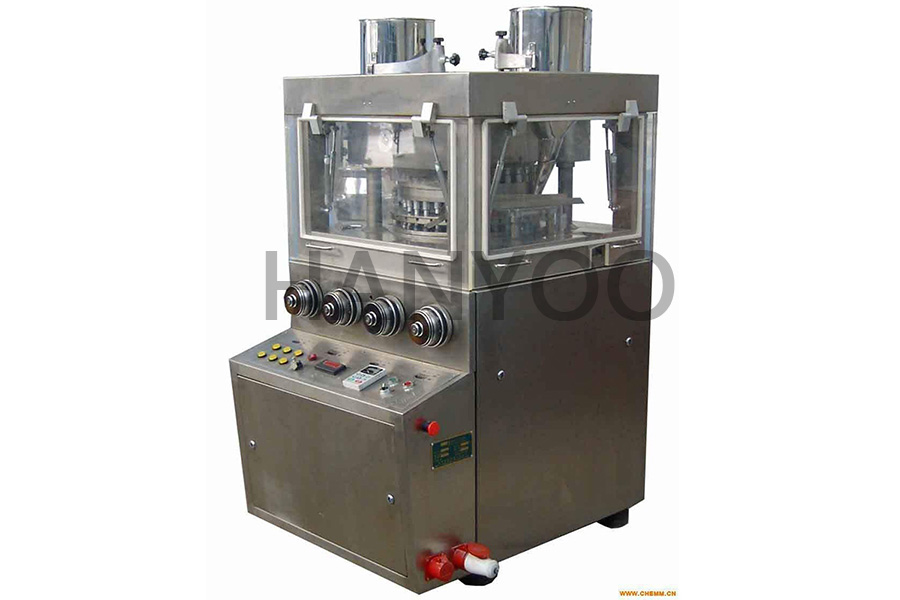