The main work of the double-layer tablet press includes the first layer of material filling, quantifying and prepressing, and the second layer of material filling, quantifying, main pressing, stripping and other procedures. Driven by the turntable, the upper and lower punching dies move clockwise along the upper and lower rail guide respectively. When the punch moves to the filling section of the first layer, the upper punch moves upward to bypass a layer of material feeder. At the same time. Down by the downward rail cant move down, at this point, the upper surface of the punch and die forming a cavity, powder materials after feeder concone fill the mould cavity, the punch through down the downward track low form excessive filling (pack), tablet press punch with the turntable continue movement, down after filling the rail gradually upward movement. The excess powder particles in the inner hole of the medium mold are pushed out into the quantitative section. At this time, the downward punch does horizontal movement, and the excess powder particles on the upper surface of the medium mold are scraped out by the quantitative powder scraping plate. To ensure the same amount of material filling in each middle die hole, then the down rush down movement, down rush down movement at the same time through one side of the main pressure wheel to complete the prepressure of a layer of material. Then, the upward-rushing motion turns into a horizontal motion, bypassing the feeder of the second layer of material, and at the same time, the down-rushing horizontal motion. The cavity from the first layer of material to the upper plane of the middle die will be filled through the second layer of material feeder. The cavity will be quantitatively filled by the filling rail and the main pressing wheel on the other side will be formed through the ejecting rail to ejecting the double layer. 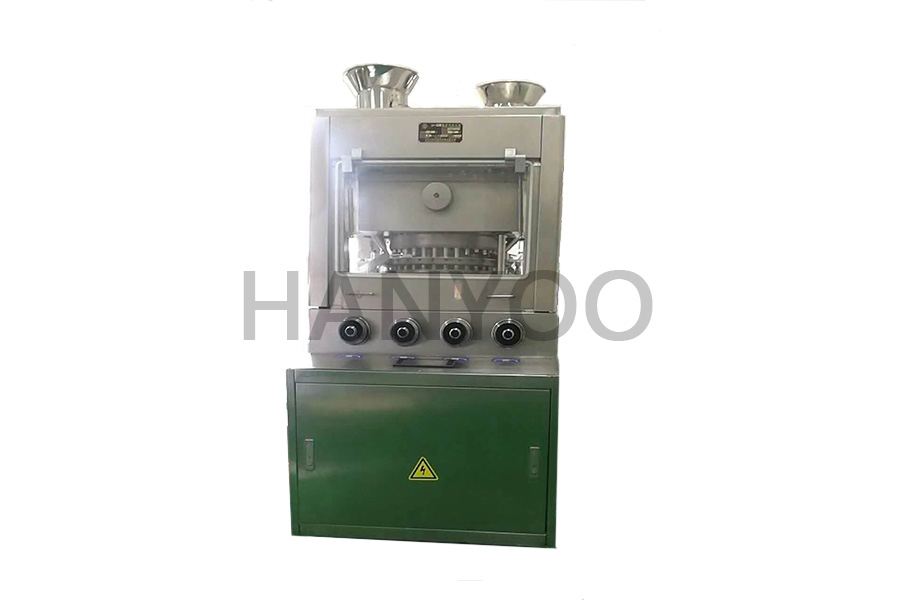